I find this to be quite an exceptional film and well delivered concentrated analysis of my friend Ray Bradbury’s book Fahrenheit 451. I feel assured he may very well have been flattered by the overall artistic effort and craft. Since he was a very strong literary individual, and given to his own perceptions, I dare not speak with certainty on his behalf. I have always been illuminated by the genius of the man and his profound warnings to mankind, and feel you have honoured him well in this reflection of the temperature at which books burn. 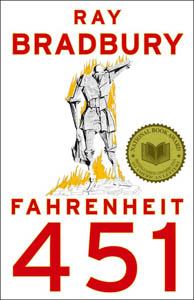 Ray Bradbury wrote Fahrenheit 451 at the height of McCarthyism. Today, with the increasing proliferation of surveillance equipment in American cities, the spread of digital books, and the decline of attention spans, Fahrenheit 451 remains a startlingly relevant work of fiction.

To view a video summary of the film, CLICK HERE

Transcript
Fahrenheit 451 is set in a homogenous, futuristic, war-obsessed America, where books are outlawed, intellectualism scorned, and the entire population exists in a state of dull pleasure and sensory overload. Ring any bells?

Guy Montag, the main character, is an impressionable fireman. His job is to burn books, which have been denounced as emotionally upsetting and subversive.

Montag starts to question his actions after meeting an inquisitive young woman, even going so far as to steal a book from a house as he burns it down. Montag becomes steadily more aware of his miserable life, and resolves to take action agains the conformist ruling society. With the help of a former English professor, Montag learns books allow for self-examination and independent thought.

Montag is then caught with the stolen books and must become a fugitive. After a harrowing chase, Montag escapes and joins up with a group of roving intellectuals in the countryside. They watch as enemy planes bomb the city, and the group resolves to construct a new, better civilization.

Major Characters
“Not everyone born free and equal, as the Constitution says, but everyone made equal.”

Montag: Guy Montag is a firefighter, and the book plots his movement from mindless drone to free-thinking book-lover. He struggles with independent thought, and is often swayed by people’s rhetoric, making him something of an archetypal citizen in Bradbury’s dystopian future.

Beatty: The fire chief, Beatty is brilliant, and very persuasive. He is well-read, and can quote famous literary works at will, but he finds the written word dangerous and upsetting. He represents the more fanatical side of censorship.

Faber: Faber is a former English professor who is Montag’s intellectual mentor. Faber teaches Montag knowledge and reason are the true paths to a more fulfilling life.

Themes, Motifs, and Signals
“If you hide your ignorance, no one will hit you and you’ll never learn.”

Fire: Fire destroys contraband, but it also entertains and delights people; Montag notices almost all fires are at night, when they will look prettier. Eventually, Montag comes to view fire as a tool not just for destruction or entertainment, but for sustenance as well.

Mirrors: Clarisse, the young woman, is described as a mirror, and one of Montag’s eventual friends in the countryside claims the new world needs a mirror factory. Mirrors represent inquiry and self-knowledge.

Censorship: Bradbury argues the population censors itself by ignoring truths or positions that make it uncomfortable. Reading books, he says, encourages beneficial self-examination, while overstimulation only deludes people into being superficially happy.

Analysis
“Everyone must leave something in the room or left behind when he dies.”

Fahrenheit 451 is a bleak satire of a world too content being content. By wiping out the written word, the world is supposedly free from dissent and upsetting information, but the only thing this brings is more unhappiness. The suppression of books is the suppression of free thought, which will slowly destroy any society.